Home Lifestyle The Art of Being Broken
Lifestyle

The Art of Being Broken 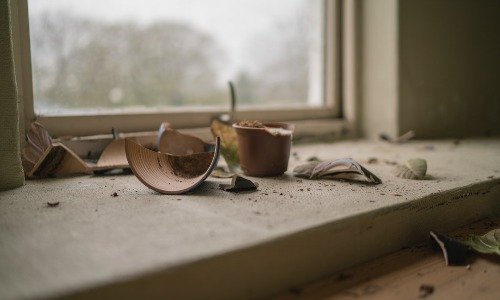 Frugality. Minimalism. Simple Living. These all follow the train of thought that what we have is enough. Or that what we have is in fact more than enough. Whatever you may call it, these ideas of thought or lifestyle choices, are asking us to strip away everything that numbs us in society. When this transformation occurs, it becomes glaringly, painfully obvious what our flaws are.

I felt as though I had uncovered the raw and unfiltered me. From spending habits to trigger words it was a writhing pit of insecurities and societal norms. I was knee deep and felt a bit like I was going to sink. That is how my brokenness felt. I had to question everything I was ever told to believe and everyday I lived my life. This was not the first time I had been broken, but this time it was entirely my own choice and doing.

This was not the first time I had been broken, but this time it was entirely my own choice and doing.

You may be thinking: wait, by throwing a few things out and saving money you went through all that? Not quite. Minimalism was not just a house with white walls and tidy surfaces. It was not a Pinterest board that I could throw ideas into. At first yes, at first it was all those things. However, after the thrill is gone what is left is only you and what you have decided to believe. No more things to mask it. Money is on automate and savings are happening. That means you actually have to question long buried ideas.

In a way, making this lifestyle change asks us to break ourselves. This is not something to fear. We break ourselves for the very best things in life; love, children, family, happiness. So what then? Stay in this wounded and fragile state? I think not.

We break ourselves for the very best things in life…

Did you know that in Japan there is an art of putting broken pottery back together? The word for this is called Kintsukuroi. In western culture the idea of putting a bowl we have dropped on the floor back together is absurd. We would quickly shield the animals and children from it, grab a broom and whisk away the pieces out of sight.

This removal of the flaw and seemingly quick dismissal of what is broken as useless rings true in our culture. Perhaps that is why we strive to never take the plunge in the first place?

Not only this, but the bowl we have dropped most likely came from the shelves of IKEA. A commonplace item- fitting all normal structures of a bowl. Yet, in Japan pottery is revered for its craft and art of the hand made object. An artisan pursued balance and ease of the object. Making this object was purposeful and intentional.

When the bowl is broken from use and wear, it is considered more beautiful for having been broken. Some may even go so far as to say that the true life of the bowl did not even begin until it was dropped. This was proof of its fragility and resilience at the same time. So as I put myself back together again, I do not hide the pieces or the imperfections. I instead revel in my own fragility and my own resilience. That is what is means to be human. That is the art of being broken.

This was proof of its fragility and resilience at the same time.

“So as I put myself back together again, I do not hide the pieces or the imperfections. I instead revel in my own fragility and my own resilience. That is what is means to be human. That is the art of being broken.”

Holy crap. This is entirely what I have been feeling and it has been stirring around in me for so long. You just put it in such an eloquent and amazing way. Thank you.

I am so glad it resonated with you as well. It took me a bit to find the words, but once I did it was also a relief. Thank you.

Kintsukuroi is now my new favorite concept. I think that, as a culture, we value those that seem to have it all together. However, when I look at my children, I am most proud of them when they stand back up after being knocked down. Putting back together a broken self takes way more courage and strength than never being broken in the first place. Well said, thank you for sharing.

You are so welcome! Brought tears to my eyes reading about your children, but that is really the truth.

The Cost of Physical and Mental Inactivity: What is Stopping You?