I quit my stressful job, here’s exactly what happened 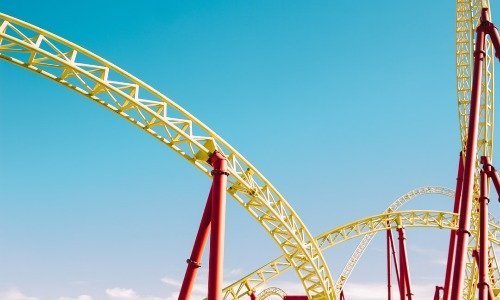 Teaching was stressful. It was also some of the most meaningful work I have done. You can read more about why I quit my stable job in education on The Financial Diet. I traded down from a good, successful career to one that is considered risky. It was worth it in every way possible. What I didn’t realize when I decided to transition careers was the roller coaster of emotions that I bought a front seat ticket for. The ride was a bit wild, but like I said, worth it. Here’s my story of how I quit my stressful job.

The rise before the fall

Right after I quit my stressful job of teaching, it felt right. I had managed to grow a business, I knew we would be moving, and we even crunched the numbers. It would work! I would work and make money from what I created.

It’s also the early days of summer. Those long summer days filled with swimming and walking. I got out in the garden and went to cycle class three times a week. I lost ten pounds and re-arranged furniture. Life was bliss. That’s because the roller coaster was still going up.

After I quit my stressful job, Imposter syndrome hit hard

Somehow it found me. That imposter syndrome that had visited me before in the classroom. It found out I was onto something new. I dropped. Fast.

Suddenly all the qualifications I had, the articles I had written, and the designs I made were called into question by none other than myself. Was I really able to talk about these topics? Who would listen to me?

It was bad, I mean after all I was my own boss and now I was berating myself for the job I had done. (Crazy)

My first reaction was an overreaction. I re-did my resume and spent hours pouring over new materials to convince myself I was educated enough on a topic. This left me frazzled, dazed, and no more confident than when imposter syndrome first hit. It was like the roller coaster was in a loop that just repeated.

It’s because I was trying to fix something that wasn’t even broken. I let it get to me. I let the fear that I wouldn’t make it get to me. It was time to re-invent myself.

I had to re-invent who I was

In careers like teaching it can be hard to know how to switch into another field of work. Even with so many transferable skills, education can feel like a label you can’t peel off.

It literally sticks to you. I was finding this label of what I was, also kept me in the imposter syndrome loop. Essentially I had to re-brand myself. This took some self-reflection and time.(Yes, even more self-reflection had to happen after I made the choice to quit. Apparently, self-reflection never ends).

What a daunting task.

I realized I needed to first look at the language I was using. Beyond the obvious doubt that crept up in my mind. I was saying things like “I’m getting there.” or “You’re working on it.” Generally, being humble leave rooms for improvement, but this kind of talk was half assery. Where was my gumption? I needed to change those phrases ASAP.

You are actually freaking doing it

Yes, that phrase above is exactly what I started saying. I started making strong and bold statements about my new job. I started to change my own self talk. (Like, practice what you preach girl)

To be honest, I think I’ll be reinventing myself forever, and I’m ok with that. What I wasn’t ok with was that damn roller coaster that was about to never let me off. But it ended, and here I am. Filled with adrenaline and freaking doing it.

You are so brave! I’m pretty early in my FIRE journey and also an educator. While I know I don’t want to work until I’m 70 like so many of my colleagues, I also know it’s hard letting go of the professional identity you work so long to create. But it is stressful. School just started and I feel like I’m drinking from a firehose. What happened to summer?!?

Oh man, I remember that feeling all too well. I’m sending you all the good vibes as you start your school year. I also look forward to your FIRE journey as a teacher. It’s exciting when teachers can make that happen for themselves.

We scrambled how we do our money as a couple

How To Get Started Freelancing Online

Freelancing for Beginners: One Piece of Controversial Advice

Freelancing for Beginners: 5 Things You Need to...

A Work From Home Routine That Gives Me...

5 Things I Spend Money On Working From...

New Career Skills and How To Find Them

What does a freelancer do for a side...