Teacher Behavior will Determine how much Students will Make 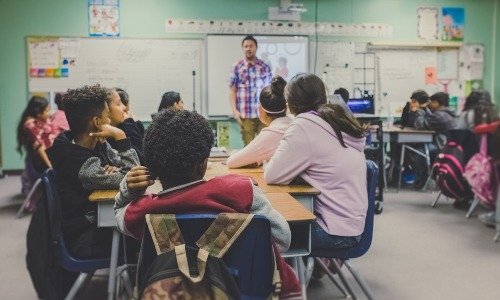 Teacher behavior determines how much their students will make. This is true for every kind of teacher from Grandparent to neighbor- behavior has a huge impact on the way students develop and perceive themselves.

Have you ever heard those stories where people say “My teacher once told me I would amount to nothing! And look at me now! “ When I hear this, my heart cringes and sinks a little further. While most teachers I know would not say this to a student, unconscious bias and body language can have the same damaging effect.

One thing needs to be addressed.What we do in the classroom or wherever the teaching takes place can lead to the future success of our students. While success is not a term I want to always associate directly with money- in today’s post we are going to talk about this directly.

Money is not everything. Money is a deciding factor in the quality of life for each individual. It is also a way to access positions of power. If we want our future positions of power to be more representative of the population then this mean teachers must be aware of their actions and implicit bias in the classroom starting on day one.

Race is an area that has been well documented in studies related to teacher’s implicit bias. Males in general have been documented to have higher levels of conflict with their teachers- especially in High School. Keeping this is mind, since the start of studies on race and gender in schools in 1995 till present Black boys have been disproportionately disciplined compared to White boys.

This is rooted in implicit bias. Everyone has bias- if you have a brain and you experienced the world you have bias. Our interpretations of hostile or docile as teachers are directly influenced by this bias. This documented behavior of teachers alone of harsher discipline for Black boys compared to White boys has an impact on the amount of money a student can make.

Black men born to low income parents are much more likely to stay in the same income bracket as their parents that black women, white women and especially white men. While many studies look at marriage rates and higher education when examining the lower earnings of Black men, you can bet that the behavior of a teacher starting in Elementary school is going to effect those earnings in the future as well.

For example, if a Black male student jumps out of their seat to answer a question or interrupts when speaking to insert a comment the teacher has two options- respond from the bias that Black male student needs to be managed or address that student as one who is enthusiastic about learning by letting them speak and then asking later that they raise their hand etc.

If teachers hold a subconscious bias (expectation) that Black males are more hostile than docile- this is going to affect their approach and their over all learning in the classroom- thus trickling down to graduation, GPA, and their self esteem in higher education and earnings for their future.

Gender bias is engrained into our society and also affects the students in the classroom. One of the major contributors to the wage gap is the number of women who do not go into higher paying fields such as Engineering, Medical, Sciences etc.

In a study recently publicized by NPR researcher Shankar Vedantam brings a compelling a soul crushing bit of news. Female students outperform male students in the math and sciences in elementary school, but once they get to high school this drastically changes with female students enrollment plummeting and grades falling in these subjects.

Shankar gave elementary classes a math test and then had each of their regular teachers grade that test (the ones who knew their genders). He gave a copy of the same tests to teachers who did not know the gender of the students to grade.

They found that the classroom teachers who knew the students tended to grade the female students lower and grade the male students higher. A repeated patter of this bias leads to girls feeling as though they are not good at math or the sciences and by the time they get to High School they have shrunk completely back to where society wants to put women.

Other documented bias relates to direct actions in the classroom such as teachers spending 2/3 of their time talking with male students over female students. Teachers are more likely to interrupt girls, but allow boy to talk over them in class and even engage with their conversations. Girls learn from a young age they are rewarded for being quiet and teachers spend a significant amount of time pushing male students to dig deeper.

When race and gender collide the bias is even more disheartening and the result catastrophic for young women of color. All of the above is true in addition to round women of color being policed in a strict and patronizing way. Across America, women of color have the highest suspension rates and are 6 times more likely to be punished that white girls according to the U.S. Department of Education. In Boston for every 1 white girl punished there are 11 black girls punished.

What may be even more shocking in this case is that the majority of teachers (especially elementary school teachers) are women. How could women be biased towards other women then? Because it is a societal structuring and something woven into the fabric of many homes in America.

Teacher Diversity: A Need that Widens the Gap

While I briefly mentioned this above, Teacher diversity is another contributing factor to the earnings gap. The teaching profession is not racially diverse and is made of up mostly- well mostly of people like me. White female teachers in most subjects- especially Elementary school and white male teachers coming in to teach subjects like Math and Engineering in High School.

When minorities make up more than half of the population in public schools across America, their teachers should also reflect this. A recent study found that teachers of color are less likely to perceive their students of color behavior as disruptive and offer far fewer referrals than their white teacher counterparts.

Increasing teacher diversity will increase equity for all students of color. It would offer role models and decrease the abnormally high suspensions rate while offering a workforce more representational of American society as a whole.

I am not saying this is a fix to implicit bias (obviously), but instead that this is something that we need to be talking about for our education system.

Awareness and Acceptance of Bias:

When school and the teachers within do not look at their implicit bias, it keeps the earnings gap in place. When teachers and parents do not examine their own implicit bias it keeps the young people from believing it is possible for them to pursue a career or job that pays well. When we continue to punish students of color, especially young female students of color, the desire to reach for the challenges in school subjects that can elevate their pay diminishes.

It is hard for individuals to inspect their beliefs or approaches. This does not mean that we can shirk this responsibility. It is a necessity for those we teach to succeed. Beyond the immediate family the teacher is one of the most influential factors for a students academic and economic success. This is not to be taken lightly.

I do not attempt to talk abut anyone’s experience as an individual. I am a white female teacher writing this post, and therefore may also leave out important pieces due to bias- so if you see this gap please leave a comment so that this may be more of a learning experience for everyone.

As a teacher I think about bias and behavior almost daily, but more recently have been thinking of this impact in terms of money- beyond the social emotional effects- and how we as humans, as teachers, can attempt to change the outcomes for some of our students by acknowledging our bias and re-training our behavior.

HSA Rollover Rules for the Investor

How to Bring up Money Insecurities to your Partner

I quit my stressful job, here’s exactly what...

Women: What was your Independence Symbol?

Expectations of the Female Educator: Accepted Injustice in...

5 Books by Women that Changed My Life

Podcast 06 – Should you Combine Finances in...

I am in Your Corner. Are you?